The Real Wealth of Fizz - Future Economics Skip to the content

Beyond Bitcoin – Speculation and NFTs

IS-LM and Making Sense of MMT

The New Scientist on Economics 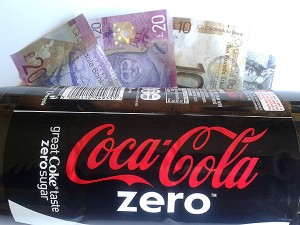 Amol Rajan, whom I have had cause to praise previously, wrote last week about Coca-Cola’s self-serving ‘anti-obesity campaign’. While much of what he writes is refreshingly scathing, I would take issue with the following statement:

[Coke] is a massive corporation that exists to make huge profits. This is fine by me, because I like big corporations: they create wealth, tax revenues and jobs.

Clearly the first part is mostly true. Mostly in the sense that a company also exists to expand the empires, wealth and reputations of its executives – which is generally also tied up with making ‘huge profits’. The problem I have is with the idea that big corporations necessarily ‘create wealth, tax revenues and jobs.’ Whether they create real wealth is often doubtful.

In the case of Coca-Cola what it mostly creates is sweet fizzy drinks and the additional pleasure that comes from drinking their drinks rather than those of any competing suppliers. If we wanted to monetise that real ‘wealth’ it would be in terms of the additional price we are willing to pay for Coca-Cola products over other similar drinks. Note that we have to pay that surplus freely – if we are forced to pay it because of local monopolies or persuaded by misleading advertising than it represents not a social gain but a loss.

Why does Coca-Cola make profits? Under the perfect competition of a neoclassical economist’s imagination firms cannot make ‘profits’. If they try to charge for their goods or services anything more than the absolute minimum to stay in business they will be forced out of the market by other firms charging less. The exception to this might be if customers willingly agreed to pay a premium for Coca-Cola on the basis of future improvements in the product, or perhaps future production efficiencies that led to a proportionately greater lowering of the price in the future. This would require pretty sophisticated knowledge of Coke’s business and the fizzy drinks market!

The more likely reality is that perfect competition does not exist and firms such as Coca-Cola have  market dominance and a  knowledge advantage over their customers. In other words Coke’s profits may represent additional wealth to them, but an equal loss to us their customers.

What about tax revenues? This requires careful thought about where money comes from. The money received by governments as taxation has earlier been created and spent by those same governments to provide services to their citizens. The real effect of this is that the government obtains goods, services and labour from its citizens and firms within its jurisdiction to provide services to those same citizens or firms. Determining the balance between donors and recipients in this process is basically what politics is all about.

If the government’s books are to balance it is important that the proportion of firms’ revenue that comes from the government ends up going back to the government in tax. So if say 20% of Coke’s revenue comes from purchases by government departments or customers funded by government benefits, then around 20% of Coke’s outgoings – whether as wages, purchases of raw materials or as profits paid out to shareholders – should ultimately find its way back to the government as taxation. That this happens implies no particular benefit from Coke’s operations – we are no better off financially than if it did not exist at all. To determine whether a firm like Coca-Cola is a net beneficiary to our government or not we need to look beyond the monetary values of government expenditure and taxation. We need to look at what it does to enhance government activities or to burden them.

Perhaps the purchasing of Coke and its supply to government employees and others uniquely enhances their labour efficiency – I don’t know, although I doubt it. What we do know is that overindulgence in sugary drinks is likely to have health consequences – which ultimately burdens our NHS. So on balance the effect on our government finances of Coke’s activities may well be a net loss. If so, that has to be set against the pleasure we get from drinking the stuff – but the actual quantity of taxes paid by Coca-Cola is really neither here nor there.

So, finally, surely Coca-Cola employs lots of people all over the world in bottling their drinks? Indeed, they do – but are jobs really ‘created’ in the normal sense of things being created? The labour supplied by someone in a job is not created by the employing firm – it is simply directed in a particular way rather than some other way. Sure they are paid money by the firm and that is usually very welcome – but that money has come from the firm’s revenues, which of course come from customers. That money would have been spent anyway – so the firm has not created the wages either, but simply directed them to some individuals rather than others. Where that direction means that relatively well-off customers are paying relatively poor workers in bottling plants, that can be argued to be creating ‘wealth’ in the sense that poor people generally get more benefit from a given quantity of money than rich people – but this type of re-distribution may not be universal. It certainly doesn’t apply to the remuneration of Coca-Cola executives and the returns to their shareholders.

In summary the only reasons to like big corporations are the following: