The (Press) Barons Bite Back Over Regulation Skip to the content

Is Morality Relevant to Politics?

John Gray on ‘Progressivism’ and Why Labour Lost 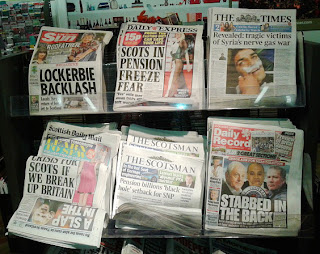 We knew the press barons (and they are literally barons, in some cases – as we shall see) didn’t like the proposed arrangements for organising press regulation agreed last month between the three main political parties. This arrangement was in the form of a Royal Charter (an arcane form of legislation introduced not by the elected representatives of the people, but by the monarch’s Privy Council) which set up a ‘Recognition Body’ which was to certify a new press regulator as conforming to the requirements based on the recommendations in last year’s Leveson Report. These requirements were in particular that the regulator itself should be truly independent of both the press and political influence, that it should have strong powers to enforce sanctions – both financial and in terms of apologies and corrections, that the regulator should set up a low-cost arbitration arrangement to deal with complaints and that complainants need not necessarily be individuals or organisations directly affected.

The arrangements were attached to the democratic process in two ways. Firstly, no change was allowed to the terms of the Royal Charter without a two-thirds majority in both Houses of Parliament; secondly, law was enacted that allows courts to award ‘exemplary damages’ in libel and privacy cases where the perpetrator is a ‘relevant publisher’ and is not a member of a certified regulatory body.

A group of newspaper publishers (News International, Associated Newspapers, the Telegraph Media Group, Trinity Mirror and the Express Group) have now produced their own Charter with some subtle but very significant differences.

Most obviously, there is no longer the Parliamentary ‘lock’, but instead change to the Charter will require unanimous agreement of the boards of the Recognition Body, any recognised regulator and the members of all of the trade associations represented on the Industry Funding Body (of which latter more later). This removes any semblance of democratic oversight of regulation of the press.

Less obviously, but intriguingly, the exclusions from membership of the Recognition Body and the regulator have been altered. In the original, no serving or former editor, relevant publisher or ‘someone otherwise involved in the publication of news or current affairs in the United Kingdom’, MP, Minister, or member of one of the other legislative chambers of the UK, including members of the House of Lords with a recent political affiliation, could serve on the recognition body. For the regulator itself this was relaxed slightly to allow former editors and other representatives of the industry to form a minority on the board, but the political exclusions were the same as for the Recognition Body.

The new Charter subtly relaxes the exclusions for the Recognition Body, removing the stipulations against former editors and those ‘otherwise involved’ in news or current affairs. So, for example this would allow presumably allow Kelvin MacKenzie and the CEO of BSkyB to sit on this body. So much one might expect, but more oddly the stipulation against politically-active members of the House of Lords has been removed. The exclusion of politicians is further reduced for the regulator itself, now excluding only MPs and UK Ministers. The most obvious potential beneficiaries of these changes, which seem otherwise absurd given the charge of political interference levelled against the original arrangements, are two of the most prominent figures involved in the press industry’s campaign for control of its own regulator. They are the Conservative peers, Baron Hunt of the Wirral, former chair of the now discredited Press Complaints Commission (PCC), and Baron Black of Brentwood, Executive Director of the Telegraph Media Group and chair of PressBoF, the current Industry Funding Body. As it happens, Lord Black’s partner is also a former director of the PCC.

Lord Black has form when it comes to self-interested manipulation. He presented a distorted view of a Parliamentary Report to the Leveson Inquiry in putting forward his and Lord Hunt’s earlier (and pretty weak) proposals for self-regulation.

>Another subtle, but surely important change is in the funding arrangements for the Recognition Body. The original Charter provided for initial government funding and for funding from fees charged for applications for recognition and reviews, but the alternative document sets funding up as grants to the Industry Funding Body. On the basis that ‘he who pays the piper calls the tune’ this may well shift power over the Recognition Body towards the press.

Other potentially significant differences in the press document are that there is no obligation on the regulator to ‘establish a whistleblowing hotline for those who feel they are being asked to do things which are contrary to the standards code’ as included in the original document; the obligation to provide an arbitration process has been reduced to a possibility; the ‘directing’ of appropriate remedies has become ‘requiring’ and there has been removal of the regulator’s right to obtain financial information from regulated organisations to assess appropriate penalties.

It has also been suggested that ‘that the industry wants to hold a veto on all appointments to the board’, although no such provision appears in their proposed Charter document.

All in all, it looks like a careful and cunning stitch-up, particularly since it appears that the press industry ‘counter-petition’ may prevent the original Charter being approved by the Privy Council. It’s time to stop pussy-footing about and accept Lord Leveson’s advice that only some form of proper legislation, albeit at several arms’ lengths, passed by the UK’s democratic representative body can stop the press Barons trampling all over us.