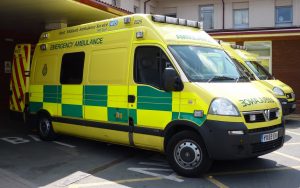 Just how much cash does the NHS and social care need to prevent the distressing stories of patients languishing on trolleys for hours in A&E departments? Can we possibly afford what it needs, or is it really a ‘bottomless pit’ as often claimed? Do we need to lower our expectations of what can be provided for us? Or does the whole funding system of the NHS need to be overhauled, with charges and/or insurance-style payments? Sadly, we are frequently being directed by politicians’ state-shrinking agendas and commentators’ ignorance towards the wrong numbers and the wrong reading of those numbers, with the result that the wrong answers are given to these questions. The truth is that if we look at things correctly, there is no reason why we cannot have an excellent healthcare system in Britain without any great sacrifice in our enjoyment of the other goods and services that the modern economy has to offer. END_OF_DOCUMENT_TOKEN_TO_BE_REPLACED

David Malone, a documentary film maker, perhaps better known these days as blogger on the financial crisis and its causes – operating under the name GolemXIV – gave a talk in Edinburgh on the 6th of December.

He’s quite a charismatic guy and gave an effective talk in a church with no aids other than a radio microphone. I hope that he will continue to campaign against the current acceptance of continuing economic policies that will undoubtedly make the majority of us worse off. I have offered him this commentary in the hope of improving our mutual understanding of the problems faced and how we might deal with them.

I was at your talk in St John’s in Edinburgh last Tuesday night and was impressed by the eloquence and passion with which you make the case that the current economic situation is a travesty of democracy and fairness. With that view I am in complete agreement, and I think you have the qualities needed to get the required message across. END_OF_DOCUMENT_TOKEN_TO_BE_REPLACED

David Cameron says he wants an apology from Labour for the state of the economy. But his approach to the budget deficit is either one of the most mendacious or one of the most ignorant ever made by a British Prime Minister. By using half-truths and gross over-simplifications Cameron has shifted the blame for the financial crisis and its aftermath from the reckless and probably fraudulent behaviour of traders of financial assets to the ‘irresponsible economic management’ of the previous government. By implication the hapless ordinary British voter is also guilty, and is going to feel the righteous pain of public service and job cuts. We are quite likely heading for one of the most unjust periods of governance Britain has ever known. END_OF_DOCUMENT_TOKEN_TO_BE_REPLACED

At the end of January 2010, UK government debt stood at £848bn and around 60% of GDP. The European Commission says ‘additional fiscal tightening measures’ are required. The Tories warn that investors are getting anxious and that the ratings agencies (who also certified the security of mortgage-backed derivatives) are about to downgrade the UK government’s debt, with the likely consequence of increased interest rates to pacify bond-holders.

Two-thirds of Treasury bonds are held by UK citizens and institutions – mainly banks and pension funds – that rely on them as secure and predictable basic assets. This is UK government money owed to UK citizens by the UK government. It is a purely internal redistribution of claims that cannot be compared, as it sometimes is, to household debt. The one-third of Treasury bonds held by foreign investors, such as other central banks and financial institutions, is a rather different story. Clearly these bond-holders have less direct interest in the long-run health of the UK economy, and so may and sometimes do, exert pressure on governments to increase the rates of return on the new bonds they issue. Were these rates of return to exceed a reasonable expectation of the political and economic tax revenue capacity of the UK government, then there would be difficulty in continuing to fund the current level of debt in the same way. In fact this situation seems a long way off. Currently interest rates are low, UK debt is not particularly high relative to other countries, and the UK has strong social and economic assets to back its liabilities. This makes UK government debt a particularly safe form of wealth in a time of economic turbulence and one that tightening capital regulations are likely to create even more demand for. The real question about the UK’s debt is not so much whether it is sustainable, but whether it is fair. END_OF_DOCUMENT_TOKEN_TO_BE_REPLACED